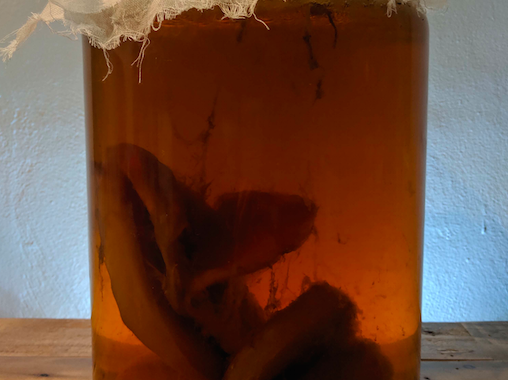 On August 14th, 2019 at Fairchild Tropical Botanic Garden (FTBG), the Rare Fruit Council Int’l. (RFCI), Miami had the pleasure of hosting Counter Culture, a boutique kombucha company headquartered in South Florida. Buster Brown, one of Counter Culture’s founders, along with Laura Sutton represented the brand and shared a great deal of information about fermentation, the health benefits of kombucha, and their philosophy on tropical fruit flavorings. As a home brewer myself, I found the discussion particularly enlightening, and it made me wonder if perhaps making kombucha is more art than science.

Don’t get me wrong, there’s a fair amount of science in play because kombucha, by definition, is a fermented tea, and fermentation is no simple sport. It is, however, a sport humans have been playing for millenia. So one might say, we’ve got the science pretty nailed down already. Kombucha starts out with three simple ingredients: tea, sugar, and a SCOBY: a symbiotic culture of bacteria and yeast. This SCOBY, also known as a “mother,” is the key to the fermentation magic, and is what differentiates kombucha from other fermented foods and beverages.

Kombucha mothers have been bred to feed on white sugar, so while many readers might feel inclined to use an alternative sweetener, remember: the sugar isn’t for you, it’s for your mother. Just as your health will decline rapidly in an environment without sufficient food, your SCOBY will struggle to survive if you don’t feed it properly. Luckily, most of the sugar you add to brew will be consumed during fermentation; very little remains in the final product. So use white sugar, one cup per gallon of tea.

Speaking of the tea, when I say “tea” I mean leaves of the Camellia sinensis plant. Kombucha mothers will consume the caffeine and require some of the other botanical magic found in this particular plant to thrive. As with the sugar, much less caffeine will remain in the final product than enters the brew; kombucha is a low-caffeine beverage. You may brew with any variety of tea you like: green, white, black, or oolong. This is where some of the art starts to come into play. Different brewers using different teas, or blends thereof, will achieve subtly different final products.

Begin with four cups of strong tea per gallon of brew. Eight tea bags is a good place to start. Once steeped, dissolve the sugar in the tea and let it return to room temperature. Transfer the sweet tea to a gallon glass jar, add your mother and starter liquid, and fill with non-chlorinated water until within a few inches of the top. Cover the brew with a piece of cotton fabric and let it sit, undisturbed, out of direct sunlight, and at an ambient temperature between 65°F-85°F for 7-21 days. The starter liquid acts as an insurance policy during the first few days of brewing by lowering the pH so other microbes, like mold, don’t take up residence while your mother works her magic.

Over the next week you’ll see a film form on the surface of the brew. This is your next generation mother. A SCOBY is usually good for 4-6 brews before she should be retired to the compost bin. You’ll know she’s spent when she’s dark brown and tears easily when you handle her. You can brew with one mother, but I usually keep two or three in the jar at a time. Store extra mothers in a separate jar – sometimes called a SCOBY hotel, use them to make another batch, or give them to a friend and spread the kombucha love! Once your brew reaches your desired level of tartness, it’s time to flavor and bottle.

Our friends at Counter Culture only use locally sourced organic produce to flavor their teas. They steep fruit and other botanicals in the kombucha for a couple days before bottling. Personally, I have found it easier to just add flavorings directly to the bottle. There are pros and cons to each. Removing the fruit before bottling certainly makes the bottles easier to clean, but you won’t achieve the intensity of flavor you can with in-bottle seasoning. Just remember what goes in must come out, so chop the fruits small, puree, or use juice.

Whichever approach you choose, first remove your mothers from the brew and set aside in another glass vessel. Reserve a cup per gallon of liquid that you will use as starter liquid for your next batch. If desired, flavor your kombucha with an ounce of fruit, juice, or herbs per sixteen ounces of tea. Transfer to swing-top bottles. Let your Kombucha sit on the counter for a few days to allow a second fermentation to carbonate your tea before transferring it to the fridge. Refrigerated, your tea will easily keep for a few months.

With so many options for teas and flavorings it’s easy to see how much art goes into a perfectly balanced bottle of ‘booch. Fear not friends, for your tastes are your own. Big fan of ginger? Dial it up! Like sweet drinks? Add more juice or fruit at bottling. Want super fizzy original flavor tea? Bottle earlier, allow for a long second ferment, and skip adding anything else. At the end of the day it’s your tea; experiment until you find a blend you like.

I’ll leave you with one more interesting fact we learned from the Counter Culture crew. While all kombucha likely has a single ancestral “mother,” not every SCOBY contains the same bacteria. Over time SCOBYs change, they evolve. Storing a SCOBY near other fermented foods may cause some cross contamination. This is not said to scare you; it’s just part of how your mother and her lineage will become uniquely yours over time. But perhaps do keep her away from your meat grinder, just to be safe.

Hopefully you now find yourself excited to join the ranks of home brewers all over the world. The science of brewing kombucha is no match for the variety yielded through the art of flavoring. Enjoy this new hobby of yours. Experiment with different teas, fermentation times, and seasonings, and occasionally – whether for inspiration or biodiversity – consider sampling someone else’s brew; the multitude of flavors available from Counter Culture are a great place to start.